The line redefined, white on black. 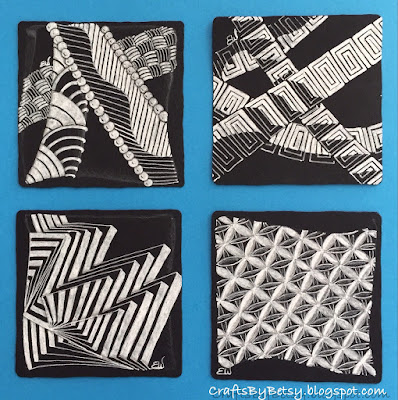 It started with me not being satisfied with my white on black tiles. For awhile, I couldn't really put my finger on why. When I drew this Meer, I thought I'd try using line width to emphasize my highlight. Whoa! That I liked. So I looked at that and I looked at my other black tiles. You know, the appreciation step.... But this time I was trying to see why I liked this so much more. I realized that on my earlier attempts I was using the white pen just like I did the black, usually to draw the outline of a shape or pattern. Where the black worked because the edge of a shape typically drops towards the background, the white brought it forward. And I was using the white for both highlights and shading and sometimes black was my highlight (for instance making the pen skip for a typical sparkle). All this back and forth really confuses the eye. When I expanded the white by redefining and broadening the line, that highlight was pleasing to my eye. And even though I also mainly use the white for the contrasting shadow, just by line width (a thin line) I could make that work too. This really challenged me to think differently as I was drawing. Definitely focused deliberate lines here. So give it a try. Draw your tangle then redefine and thicken some lines. It's like the black you leave showing is your line, not the white. Consider where to leave contrasting thin lines (kind of like shading, too much or to little doesn't work all that well). The added benefit of the thicker white lines? You can shade on top of the white. I used graphite and occasionally my black micron, but you could also use a gray marker or other colors. Think layer. The downside of all that white? The white gel pens don't seem to last as long as the microns.

This one is my favorite, I love the thin white edge on the right side of Shattuck giving it dimension. I used a Sakura white Gelly Roll, Zenstone, a white CretaColor Aqua monolith pencil and woodless pencil. I also used a black micron to redefine some line edges (for instance around the pearl sides of Meer). Tangles: Meer, Keeko and Shattuck. 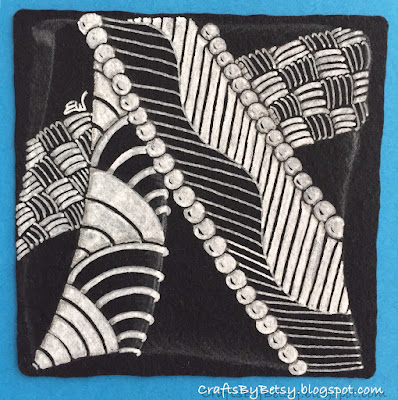 This Monotangle of Ambler only uses the black tile and white Gelly Roll. Really, there is no other shading other than line width! I started making them solid white, but the varied line width makes it so much more interesting. 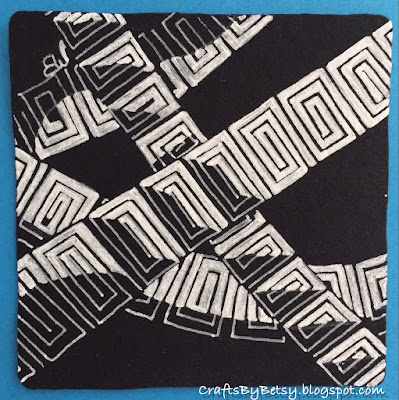 This is two tangles, Static on top with Maryhill filling in below and I used the Gelly Roll and graphite shading plus a little Zenstone around the edge. 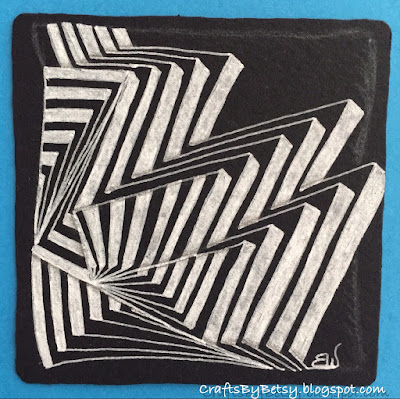 A Fife monotangle using Gelly Roll, graphite and (not sure whether I used Zenstone, General's white charcoal or CretaColor white watercolor pencil, or maybe a combination). 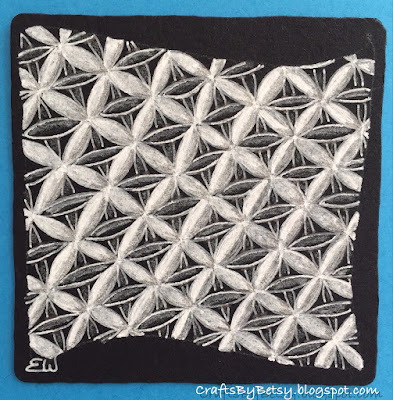 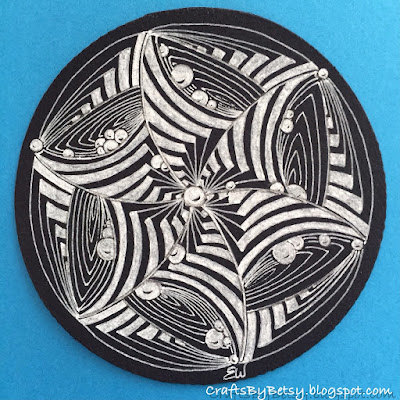 If you too aren't quite satisfied with your black tiles, give this a try. Even if you are, it's a nice alternative (or could it be a variation? ;-)