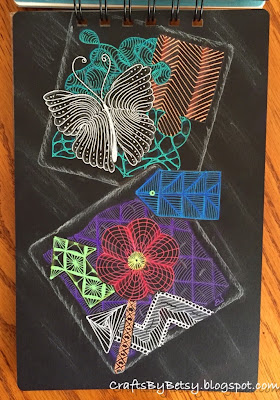 I'm just back from vacation in Moab. Had a blast drawing, walking, met up with my brother, I even met a CZT who attended the first CZT class! An added bonus was she introduced me to Taiko drumming. Wow! So as it turns out, the first class had a few tangles that didn't make the final cut. I got to see some of those early tangles. Some ended up slightly different or with a different name, or maybe it was a technique vs a tangle, but there were a few I wanted to try right away.

This week's Diva Challenge #213 is to use traced objects as your string. Game pieces were suggested among other things. Hmmm, what could I use? Went to my craft room and, (Of Course!) die cuts!! Some were just flat out too elaborate, but I pulled out some extras that were more basic.  I seldom throw anything out, never know when you might need it! And these seemed like a nice selection. 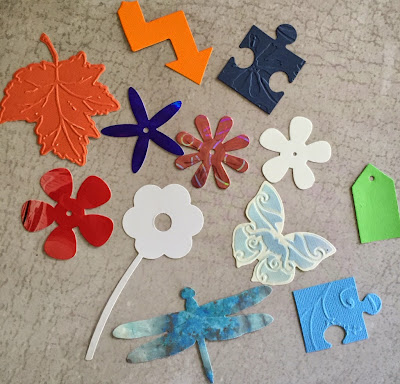 I'm working on journal covers and dividers for my bullet journal. I decided to try this out on black Strathmore Artagain paper (60 lb) cut to size for my journal which is exactly half a sheet of standard paper or 8 1/2" x 5 1/2". I have already punched and bound the blank pages in my journal so I can work on them whenever I want... The idea is to take it apart and laminate anything that will see heavy use after the artwork is completed then re-bind it. For more info on my original bullet journal check out this post.

This is what the page looked like after tracing two standard Zentangle® tiles and some of the die cuts with a white pencil. I think I used a General's charcoal white. 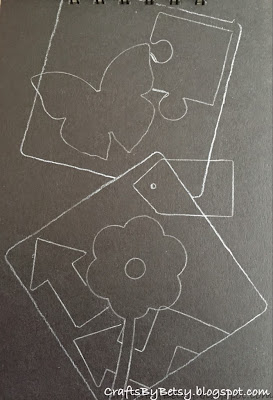 Next I used Sakura Gellyrolls in white and the moonlight set. For shading, I tried using them as a watercolor using Sharla Hicks suggestion here. It's a cool technique that I likely wouldn't have thought of on my own. It didn't work fabulous on the thinner black paper (but I think heavier white would be great) but some of that could have been my technique needs practice. I ended up also adding Cretacolor Aqua monolith woodless watercolor pencils and Stabilo CarbOthello pastel pencils. Because of the pastel pencils, I did finish it off with a sealer.