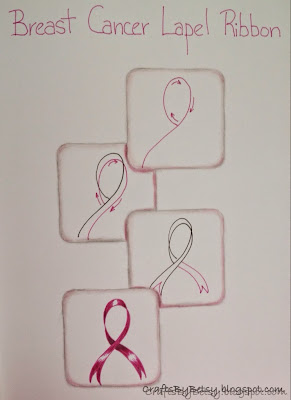 October is breast cancer awareness month. While working on my Diva challenge #190 in honor of Laura's grandmother, Ardath, I figured out the steps for the lapel ribbon and thought I would share them with you.

This is also the day to post the winners of the TrimARim giveaway. Hope and Donald Wilka are the two lucky winners! I've left a comment for Hope on her blog link and I've e-mailed Donald.  Congratulations! 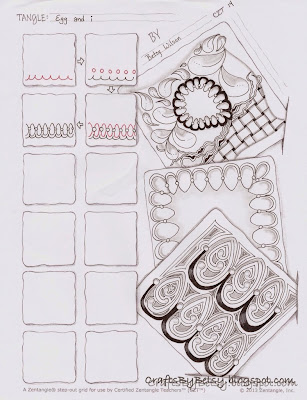 My husband and I recently returned from a nice vacation up through the Olympic Peninsula, across the Northern Cascades into Glacier National Park, through the Hells Canyon region and back home. On the first leg of our trip, I noticed a street sign "Egg and I Road".  I thought that rather odd and interesting and just couldn't stop thinking about it for several days.   After a little research I realized it was a road named after the book by Betty MacDonald, The Egg and I published in 1945 and later adapted into a movie starring Fred MacMurray and Claudette Colbert. Apparently the chicken farm where MacDonald lived circa 1930 was on the now named "Egg and I" road.  I concluded that in addition to adding it to my reading list, the road name would make a great tangle! What do you think? It naturally lends itself as a border tangle. But as you can see here, it can also be used along the string or as the string itself. I noticed that it has similarities to Queen's Crown by Suzanne McNeill (I can't link you to it due to the continuing problems with her website) however the Egg and i, in my opinion, differs, goes further while still being simple. Is it a variation? Is it it's own tangle? You be the judge. I hope you enjoy it. 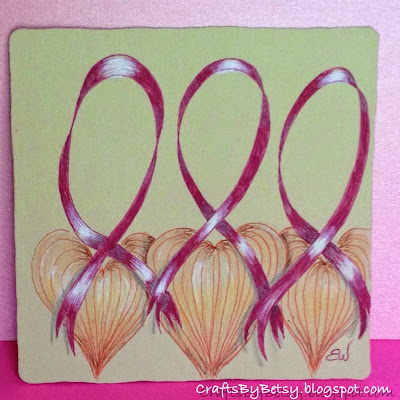 And finally here are two tiles that use a variation of Egg and i, in honor of Ardath and anyone whose life has been affected by breast cancer. This first is on a Zentangle Renaissance® tile. Tangles: Egg and i (variation) and Heartstrings by Helen Williams. Although the hearts are drawn with red Sakura Micron, they resembled Japanese Lanterns to me more than hearts, so I used orange, brown and white pencils to color them. I also used a pink Sakura Pigma Micron. 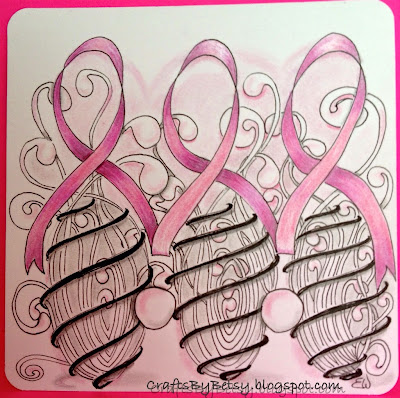 This second tile is an Apprentice tile from Zentangle and uses the tangles: Egg and i (variation) and Mooka. I used Sakura Microns, Faber-Castell Polychromos, General's white and Derwent graphite.